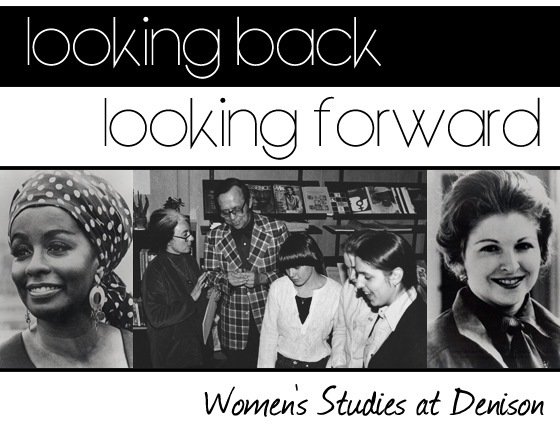 Black and white candid photograph of three students and former English professor Tommy Ray Burkett reattaching a display panel that came loose. This happened during the anniversary celebration of the Women's Resource Center. Two female students and Burkett are holding up the unhinged panel with their hands. In mid-sentence, another student is holding up the recently-unhinged metal brace, pointing it at the cameraperson. An unidentifiable person watches in the background. Some of the periodical titles that are sitting on the shelves are as follows: "Chronology of the Women's Movement in the US 1961-1975, published by the US National Commission on the Observance of International Women's Year 1975"; "Aphra the Feminist Literary Magazine Roads Past Present Future"; "Women Bring All Voters Into the World. Let Women Vote"; "SIGNS: Journal of Women in Culture and Society, Summer 1979. Volume 4, Number 4."