Some essays reexamine the classical works of William Shakespeare, others attempt to shed light on the life and thoughts of Emily Dickinson, and still others discuss more recent works, such as a video from MTV or Don Bluth’s All Dogs Go to Heaven.
Essays are selected for publication by a student Editorial Board under the leadership of a Junior and Senior Editor, as well as a faculty advisor. As a special feature, Articulāte publishes each year’s winner of the Robert T. Wilson Award for Scholarly Writing.

Funded by a grant from the Andrew W. Mellon Foundation to the Five Colleges of Ohio (Next Steps in the Next Generation Library: Integrating Digital Collections into the Liberal Arts Curriculum, 2010) Acknowledgments: Joshua Finnell (Humanities Librarian); Sylvia Brown (Assistant Professor of English); Courtney Vinopal (Class of 2013); Daniel Carlson (Class of 2015)

Into the Wild: Exploring the Power of Black Female Wildness in Toni Morrison’s Jazz
Maddie Dirrim

I Don’t Want [You] to See That: Resisting Self-Disciplinary Performance in The Comeback
Sam Fujikawa

Time, Masculinity, and Isolation in The Country of the Pointed Fir
Olivia Bernard 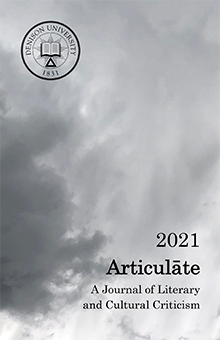